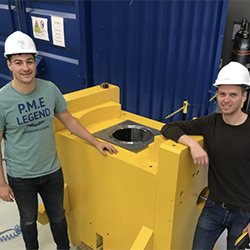 I joined the In-service Inspection team with the goal to eventually accompany them during their work peak inspections. We were to perform non-destructive weld inspections at a boiling water reactor (BWR) in Sweden.

We started with the weld inspections of the core shroud support legs using the ‘ARCHI’ manipulators. The manipulators had to be lowered under water through the reactor core grid which meant that the reactor pressure vessel of the BWR was open. These inspections were performed using a technique called Eddy current testing (ET) with the possibility of also using Ultrasonic testing (UT) if the ET technique indicated a significant defect in the weld.

Anneloes Janssen:“Jan-Albert quickly blended in with our team and contributed in various projects throughout the year. He is a fast learner and shows good problem solving skills."

Once the manipulator was in place, several arms could be folded out so that the ET sensor could be positioned on the weld that needed inspection. Controlling the manipulator is something we trained for during the project preparation. The manipulator then moves the ET sensor in a scan pattern and the data is seen on a screen and interpreted by someone in the team. Interpreting the data looked like reading text with a foreign alphabet and all the data interpreters in the inspection team have to be qualified in order to do so.

Jan-Albert (left on photo) Trainee:“I have had an amazing experience in 2020 with the inspections being the cherry on top. It is something that I will always remember throughout my career."

We then started with the J-Groove and connection weld inspections which were located in and around pipes entering the reactor pressure vessel. The manipulators for these inspections were all connected to a remote controlled submarine and followed a similar data acquisition/interpretation process. After the inspections were completed it was time to clean up and for the data interpreters to finish the reports for the client.